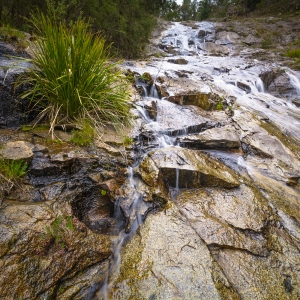 Now this location was a mission and a half. Very well hidden, not far from Bombala, is a secret waterfall. We’d asked around but hardly anyone had heard of Nalbaugh Falls. So our first expedition to find it ended in disappointment. Not a single sign anywhere along the Coolangubra Forest Way. We ventured down a couple of the forest roads to the right but quickly realised that we could get lost pretty quickly up there. So we agreed to head home and try to get more information.

Thanks to the assurance of a couple of mates, we knew the falls were there somewhere. We were told it was definitely on Southern Access Road (it’s not) but we did drive up and down a few times just to make sure. We’re pretty sure the farmer up there must have thought we were weird, but you get that. For one last chance, seeing as the weather was worsening and it was looking an awful lot like we were going to get very wet, we took a turn off Coolangubra Forest Way and followed for a while.

Then we struck gold. A tiny little sign, about a kilometre in said “Picnic Area”. Yay! We were on the right track. Following the road for a while more Gee suddenly pulled up and reversed. Out of the corner of his eye he’d caught a flash of an unnatural green. It was hidden down what didn’t even look like a road, more like a wash out on the corner, but yep, it was it. The picnic table for Nalbaugh Falls.

At this point we didn’t hold out much hope for the falls themselves. Some scrubby Australian bush, and not even a creek in sight, but we could hear it, so we followed the path down. Just so you know, the path to the falls is steep. Very, very steep. But it was worth it, because the falls are lovely. They are also quite a lot bigger than the photos make them seem at first. We’ve included one with Gee in it to give you a sense of the scale of them. On a hot summer’s day, the waterhole would be very inviting for a swim and the falls themselves must be very impressive after a downpour.

Probably the funniest thing about the whole experience was as we were leaving. We decided to head to our next location via Bombala rather than go back over the 40 odd kilometres of dirt we’d followed to come in. And there at the turn off to the Monaro Highway was a sign. Not an easy to see sign, but a sign none the less. 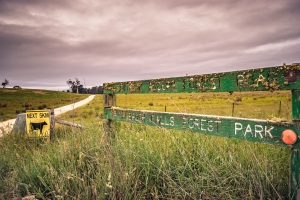 So, it you’d like to check out these lovely falls for yourself one day here’s how we suggest you do it. Head south from Bombala along the Monaro Highway. 21kms from Bombala is the turn to the left for Southern Access Road. Follow that through to the end and turn left. Continue along a little way until you see Quartzite Road to the road. Follow along until the intersection with Pines Road. Continue 500 metres and keep your eyes peeled for the little green picnic table straight ahead. Congratulations, you have found a hidden gem. You can camp at the site, but it wasn’t really very appealing for tents. It would be much more comfortable for camper trailers. 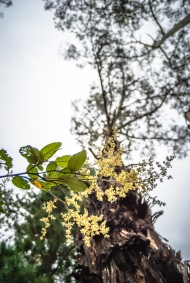 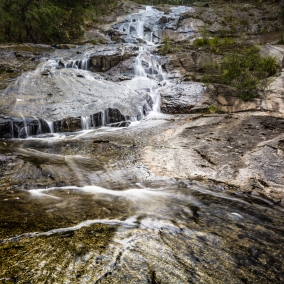